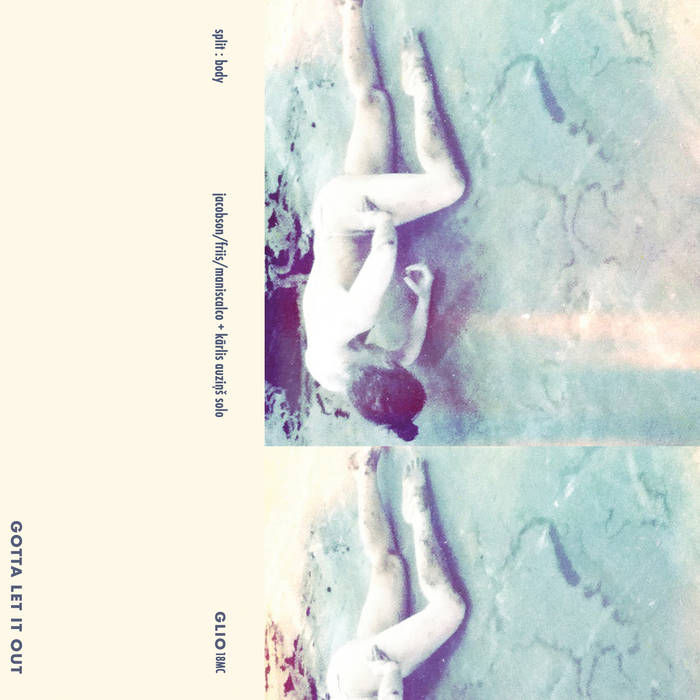 Split tape featuring crème de la crème of the new vibrant Copenhagen avant-garde music scene. A side is a live recording from the minimalistic voyage of the double bassist Tomo Jacobson (PL), electronic musician Maria Laurette Friis (DK), and pianist Emanuele Maniscalco (IT) . B side is a full of attitude solo soprano sax offering by the Kārlis Auziņš (LV). The theme of the split is body.

Side A: "presents an extended opportunity for an idea to develop and evolve over the course of the performance. (...) This album demonstrates the breadth of Jacobson, Maniscalco and collaborators in their musical endeavors. "
Side B: "the playing of Auziņš should find a willing audience in the many aficionados of freely improvised saxophone. It proved a most worthy b-side!"
(David Keffer - Poison Pie Publishing House - USA)

A side: "The ethereal voice of Friis and her subtle electronics set the atmosphere of this dreamscape, gently supported by minimalist bowing work of Jacobson and the sparse playing of Maniscalco. Slowly Maniscalco with fragmented, rippling gestures and Jacobson with delicate pizzicato and arco work transform the evocative, minimalist interplay into a more playful one, adding more more volume,but keeping it colorful and nuanced until its touching coda."
B side: "The opening, short solo piece is a masterful demonstration of extended breathing techniques, comprised of waves of dense, cyclical eruptions that often sound like a Celtic bagpipes. The second piece is a lyrical 31-minutes improvisation, close in its spirit and sonic territory to the solo projects of British John Surman. Auziņš tells here a complex, multilayered story with commanding elegance and great focus on detail. The last improvisation is the most emotional one despite its flirting with sustained, noisy breathes."
(Eyal Hareuveni - Salt Peanuts - Israel/Norway)